New Court Volunteers Advocate For Berks Children
CASA of Berks County swears in the 13th class of volunteers for a team of 54 court-appointed special advocates.

"CASA volunteers are like the Navy SEALS of volunteers, going anywhere and everywhere to be the voice of the child." Says newly sworn-in child advocate Cindy Bannon. "I look forward to serving."

CASA, which stands for Court Appointed Special Advocate, is a program that trains volunteers to work with abused and neglected children to determine what is in the best interest of keeping them safe and nurtured.

Cindy Bannon was sworn in as an official CASA advocate with three others during a court ceremony on November 30, 2021. The group makes up the 13th class of volunteers since CASA Berks County was founded in 2015. They join CASA advocates already on duty to comprise a team of 54 Court Appointed Special Advocates.

Steve Reinbrecht, one of those sworn in with Cindy, has a MA in English and spent a career as a reporter and editor for the Reading Eagle. Today he is semi-retired and teaches part-time at RACC. Steve comments, "CASA sounds like a good opportunity to volunteer for something serious." As he looks forward to the first case, he remarks, "I think children are important. They're the future, that's for sure."

CASA volunteers serve as an extension of the eyes and ears of the judge in dependency court cases. Volunteers undergo more than 30 hours of training that includes observing dependency court hearings. After being sworn in, a CASA is appointed by a judge to advocate for the child's best interests.

The CASA stays with the child reaches a safe, permanent home and their case is closed. CASA volunteers work with legal and child welfare professionals, teachers, family members, and others to ensure the judges have all the information they need to make potentially life-changing decisions for each child.

Judge Art Grim (retired) serves on the CASA Board of Directors and said, "With 30 years as a Judge, I've always been concerned about abuse, both on an adult and child level. I spent my days in Juvenile Court. So many of the young people I saw came from abusive families. That is what drives me to support what CASA does. I have so much respect for the CASA approach."

Terri Baller had a special swearing-in ceremony of her own with Judge Ullman as a covid quarantine kept her from participating with her classmates. Terri, Director of Instructional Programs at Reading Muhlenberg Career and Technical Center, learned of CASA through her volunteer work with Opportunity House. "I'm really looking forward to helping children who need someone to advocate for them," says Terri.

Lori Scargle echoes her thoughts. After a career in the travel industry, Lori shifted to being a kindergarten instructional aide. Discovering CASA on Facebook, Lori says, "This is a way to really make a lasting impact – a lifetime impact on a child."

Those interested in becoming a volunteer child advocate need to submit clearances, references and attend an 8- week training course. The next class begins on March 3, 2022. Interested in learning more? Don't hesitate to get in touch with Christa Yeager by email:  christa@casaberks.org 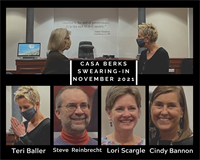